Release Day: In too Deep by Selene Chardou

Synopsis
In too fast…
Trista Lennon-Carter received a phone call that will change her tranquil life with her husband, rock star Linx Carter, in the blink of an eye. All she knows is her brother, Trey, is either dead or being held against his will in Northern Ireland and despite him being the Demon’s Bastards’ Sergeant-at-Arms, he needs her help.
In too far…
To save Trey, Trista will have to take Linx back to the very place she grew up and the same place she’s wanted to escape from her entire life. She will also have to involve the very Motorcycle clubs she has no wish to deal with ever again. When it is a life or death situation, she would do anything to save the only family she has left.
In too deep…
The club life has become ingrained in Trista like a tattoo and to save her brother, she will be forced to become the person she most feared was a part of her all along: a vengeful, fearless murderer who will stop at nothing to save Trey. With her life and that of her husband’s at stake, will she survive the nightmare their world has become, or will it drag them back into the criminal cesspool she has finally managed to escape?
The stunning conclusion to The Lovers Duet, Trista and Linx’s journey will be one of strife, hardship and beyond the boundaries of anything they have ever had to face before. Will they be able to endure or will the past and their current present ruin their future happy ever after? 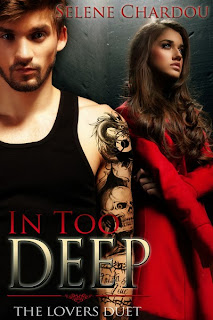 Meet Selene
BLOG / GOODREADS / TWITTER / FACEBOOK / PINTEREST
Selene Chardou is a world traveler and the alter-ego of Elle Chardou.
Ms. Chardou’s writing is all about hot romance and exciting times with the wild, damaged, out of control and/or rich and famous set in the New Adult realm.
She is currently working on The Will to Love, the second novel in the Scarlet Fever Series, which chronicles the relationship of Will Cullen and Laurel Munsen. She is also working on Deadly Seduction, the first novel in The Rough Riders series, which chronicles the issues between three Motorcycle Clubs, and various criminal elements in the tri-city area of Reno, Lake Tahoe and Carson City in Northern Nevada.
Ms. Chardou has lived abroad in Stockholm (Sweden), Manchester (England), Los Angeles, the San Francisco Bay Area and Portland. She currently resides in Las Vegas, Nevada.

Out From Under (The Lovers Duet #1) 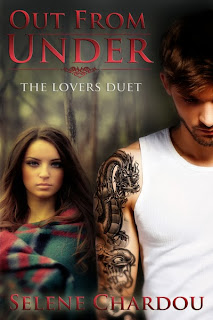 Synopsis
Trista Lennon is strong, independent and only desires freedom. Freedom from the control of her parents, freedom from the motorcycle gangs she has had to put up with her whole life and freedom from a relationship that will trap her into the very life she has no wish to ever live.
The day before she’s supposed to leave for Stanford University to pursue her dreams, her world is shattered. After a tragedy that tears her family apart, Trey, her cousin, Talia, invites her to L.A. Her life is all the sudden Hollywood stars and sunshine, late nights and wild parties.
And then she meets him.
Linx Carter isn’t looking for a relationship. He survived a dysfunctional marriage with his childhood sweetheart, which produced two sons, an inability to trust women and a multitude of lies. He merely wants to recuperate from a rough, six month tour Winter’s Regret just completed with superstar band, Scarlet Fever, and enjoy a little peace and quiet.
Until he sees her.
Trista and Linx fight their attraction for one another like war on a battlefield.
She has a closetful of secrets and he would rather be single and pathetic than date a teenage girl who seems older than her years. However the passion between them is too much to resist and they realize in order to heal one another, they must destroy the walls they have constructed so tightly around their hearts.