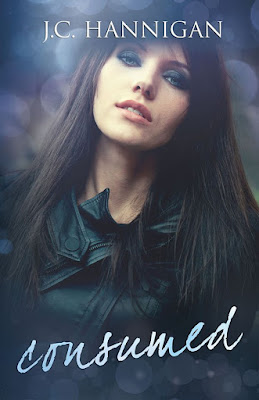 Jax Walker is a hard man to resist. He’s tall, dark, and delicious. Harlow didn’t plan on falling for another, with her heart still stuck on Iain. But it’s so hard with him gone. And she’s been aching since they last touched. Two whole years of silent wondering; of desperate sleepless longing. Fate, however, may have other plans. Just as Harlow’s ready to open herself to new love, her whole world is pulled into a twisting and painful spiral. In this new adult novel, readers are consumed by the collision of past and present. Raw and dark, this emotional minefield is the perfect second book in the continuing story of Harlow Jones. 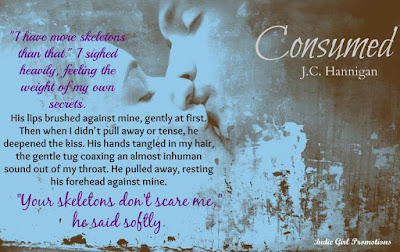 Hannigan was new to me with Collide she is a delightful surprise. I am giddy at having another author on my list of those to read.

Consumed follows Harlow to college while the subject is not taboo like Collide, the book is well written. I feel that the series/Duet? Is very interesting. The books read similar to a journal of sorts so you get a real honest feel for Harlow’s point of view. 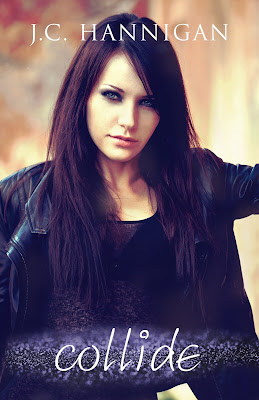 Harlow Jones has a troubled past, and a questionable future. Surrounded by death, tragedy, and intrigue, she is forced to mature long before her time. Plagued by anxiety and depression, she hides her inner turmoil with spite and sarcasm. Her thick skin is impenetrable…or so she thought. Until she becomes involved with her grade twelve English teacher. In this exclusive entry into the new adult genre, with raw style that is as dark as it is poignant, Collide presents the ultimate choice: forbidden love or doing the right thing. 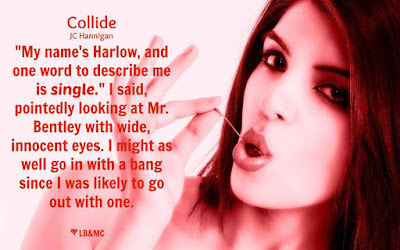 JC Hannigan lives in Ontario, Canada with her husband, their two sons, and two dogs. She writes contemporary romance, through which she brings to light awareness of mental health and social challenges. Like any good Canadian, she loves hiking and carbs. Collide is her first novel.


http://www.rafflecopter.com/rafl/share-code/MzNhODg2YjViN2I2MmQ3ZTc3NDBiNWZkOTI5ODZmOjY=/?
Posted by Unknown at 5:00 PM