Synopsis
Danny and Liv are back...

Danny loves Liv. He knows he loves her more than she loves him because she ran without a word when she saw their future mapped out before her. He knows he will never love anyone like he loved her and this time he doesn’t think he can move on.

They needed a second chance because they just weren’t ready for their first, but when events changed everything between them, they discovered they were just human after all. Now Liv and Danny have to find a way to survive being hurt by each other.

They doubted, they underestimated and they did believe the worst, but only because they were too young the first time and too vulnerable the second time. But now they have changed and if they are not the same, surely things can only turn out differently? 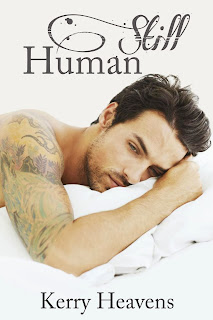 Amazon: http://amzn.to/Hccm2v
Amazon UK: http://amzn.to/1cLKEox
Smashwords: http://bit.ly/1gYLBfR
Sale
Just Human is on sale for only .99¢ to help celebrate the release of Still Human!


Excerpt
Scott is up, dressed and looking particularly chipper when I arrive laden down with groceries.
“Wow! You realise it’s A.M. right?” I rib as I put the groceries down.
“Yeah, yeah,” he dismisses.
“So how are you?” asks Jen with her well-rehearsed tone.
“I’m doing okay,” I say, trying not to brush her off. I know she is worried about me, but I can’t do what she wants me to do. I’m not chasing Liv. Jen has tried cajoling, nagging, yelling and crying. There is only bribery left, but she seems to have risen above that. She wants me to be happy, but she is wrong about how I can achieve that. I should have left the whole thing alone. But I went against my gut and this is the result. I won’t make that mistake again. I’m staying put. Screw Liv.
“Working hard?’ Jen asks, this is more of an accusation.
“Yes,” I say like a sulky teen. “But it’s what I need right now. Anyway, I need the money…I’ve a huge credit card bill to pay.” I joke, referring to the ring. But there is little humor to be found, even when the joke is my own. I sigh. How did I become the guy with two unwanted engagement rings to his name?
Jen doesn’t push further.
“So whose turn is it to cook?” I ask, knowing full well it’s mine, I’m just trying to change the subject. Jen rolls her eyes and sets about making coffee. Scott takes the morning papers over to the table, his usual position. I’ve no idea when he became exempt from cooking, but Jen and I take turns.
I get on with mixing the batter, it’s second nature now, and Jen and I move about the kitchen in perfect sync with one another. I wonder distantly, how I thought it would be easy to give this up and move. I love these guys.
We make Scott do all the donkey work after breakfast; it’s only fair that he cleans up. Jen and I poke fun at him for our own amusement, from where we sit in the garden.
“I’m just not used to seeing him this alert on a Saturday morning,” I tease.
“We went for a walk on the beach this morning,” Jen says with a knowing look. “We had stuff to talk about.”
“And?” I ask, knowing full well the subject they needed to discuss. They have been back and forth all week on this sperm donor thing. I know Jen is terrified, but Scott sees it as no big deal and just wants to get on with it. I really admire the guy; hell, it’s quite a dent in the old masculinity. But as far as he is concerned, it’s just a blip. Any child that is conceived as a result would be his and his alone. Jen has just read one bad example and it has her all in knots. She’s worried that Scott won’t feel connected to the baby and she’ll be left all alone. That just wouldn’t happen.
Scott joins us just then and they smile at each other. “I talked her around,” Scott says, never taking his eyes off Jen as he sits beside her. God, he loves her.
“That’s great!’ I exclaim and put my arms around Jen lifting her slightly out of her chair. “So what happens now?”
“Well…we start looking,” she says with a nervous smile. “It’s a long process and we need a few months to figure out my ovulation issues.”
Okay, here goes. I can’t handle any more rejection this week. “I don’t know the best way to approach this,” I say, looking them in the eye in turn. “But, when you’re ready, I was hoping you would consider me.”
Posted by Unknown at 9:00 AM