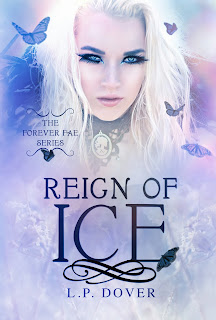 Title: REIGN OF ICE
Author: L.P. Dover
Cover Designer: Mae I Design
Release Date: November 11, 2013
Series: Forever Fae series – Reign of Ice is the fourth and final installment. A spin off series will debut in the spring of 2014.
Genre: NA Fantasy Romance- due to the graphic language and sexual content of the series it’s recommended for readers 17+

Synopsis:
Two courts to four is what needs to be … to save the land so shall we see.
The scroll has been found and now the fae know how to defeat the dark sorcerer, to end his evil existence in the Land of the Fae. However, the only thing standing in the way is the one bond that must be formed; the one that will empower all four courts together and make them invincible. Ariella and Brayden’s bond will not come easily, for Ariella is mischievous and head-strong with a heart of love, while Brayden is strong and loyal with a heart of ice.
What do you do when the fate of your land rests upon your shoulders and the bond you must form to save it? How are you supposed to do that when the one man to help you fulfill the prophecy is the one man who doesn’t believe in love?
With all four princesses bound together as one, will they be strong enough to save the life of Ariella who is destined to be the one who ends it, the one who will sacrifice everything to save the people she loves. In this final installment of the Forever Fae series you will see how the bonds of love and all the sacrifices it takes to truly conquer the evil once and for all. 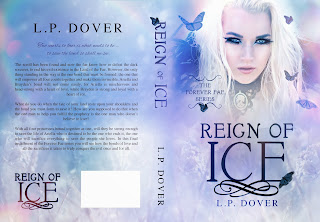 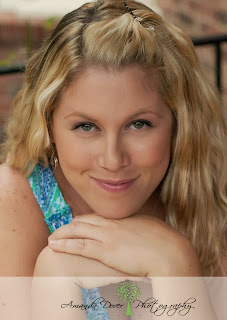 About the Author
L.P. Dover is the author of the Forever Fae series, as well as the Adult contemporary series called Second Chances, and her NA romantic suspense standalone called Love, Lies, and Deception. She lives in the beautiful state of North Carolina with her husband, her two wild girls, and her rambunctious kitten called Katrina.
Before she began her career in the literary world, L.P. Dover spent her years going to college and then graduated to cleaning teeth, which she loved doing. At least until the characters in her head called her away.  She has never been the same since.
You can find L.P. Dover at: